On Friday April 15,2016 @ 13:11 Station 57(South Bowers), Station 42 (carlisle), Sussex county medic 101, Trooper 2 (Delaware State Police Aviation was dispatched to a MVC Rollover in the area of 560 bennets pier rd. Rescue Engine 57-1 responded under the direction of Chief (B.Johnson) and a crew of 5. Engine 57-5 responded under the direction of Assist.Chief(Jason Harvey). Rescue Engine 57-1 arrived on scene as reported one vehicle off the roadway on its roof, With the occupant already pulled out of the vehicle prior to arrival. While Rescue 42 (carlisle) was making a response, one of there units came up on a second motor vehicle accident within there district. There units then diverted to there accident scene. Due to the minor injuries Chief Johnson canceled trooper 2. Bls 42 (Carlisle's ambulance) checked out the pt and obtained a pt refusal. Chief Johnson placed the situation under control and returned all units. 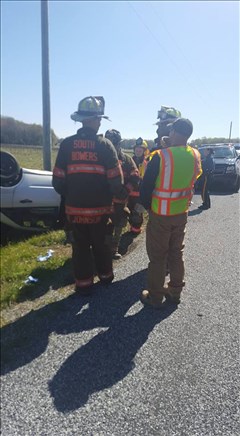 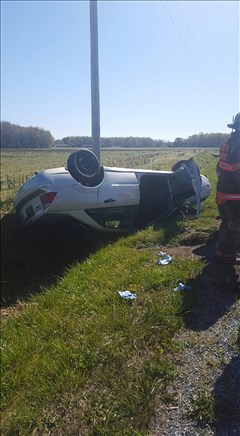